Is Britain open for business? 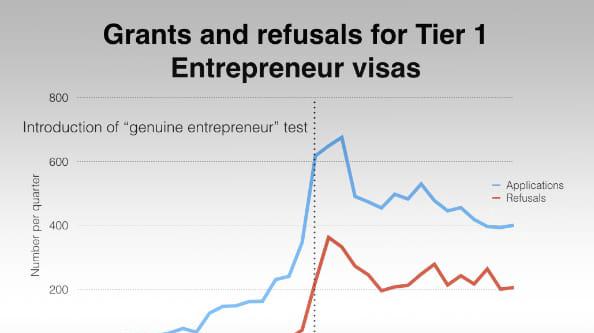 *Businesses large and small are the backbone of our economies, and enterprise is the engine of our prosperity. That is why Britain is – and will always be – open for business: open to investment in our companies, infrastructure, universities and entrepreneurs. *

Entrepreneurs are used to taking risks. And in applying for a Tier 1 (Entrepreneur) visa, they will certainly be taking one.

While in the three years to December 2016 the UK issued entry clearance to 2,821 holders of entrepreneur visas, and granted in-country extensions of leave in 7,283 cases in the same category, the refusal rate for both applications has consistently hovered around the 50% mark.

This makes it the UK visa route with the highest refusal rate outside of the asylum category.

In light of recent political developments, this is important. According to research, there were 35,193 directors of newly-founded UK tech businesses in 2014, with 7,426 of those being foreign nationals. Of the new 2014 directors, 3,188 were EU nationals.

Although it is still very far from clear what rules will govern the  rights of European nationals who wish to live and work in the UK after exit, early indications suggest that free movement will almost certainly not exist in its current form. European nationals coming to the UK who wish to set up or run a business will most likely have to negotiate this application process, or something very similar.

The full article at Free Movement considers the requirements of the entrepreneur route, its future, and tender some thoughts as to why the refusal rate remains so stubbornly high.

We occasionally post items which we believe to be of interest to clients and the wider immigration practitioner community and many appear on the Free Movement website, where Edgewater Legal contributes on a regular basis.